Tanzania is wild and lush, and within it lies one of the tallest peaks of the world: Mount Kilimanjaro. Standing above a startling 19,000 feet, the mountain is actually a series of three volcanoes, topped with white snow and ice. Its name, one of its unique features, dates back to the mid-1800s, when early European explorers first visited the region. 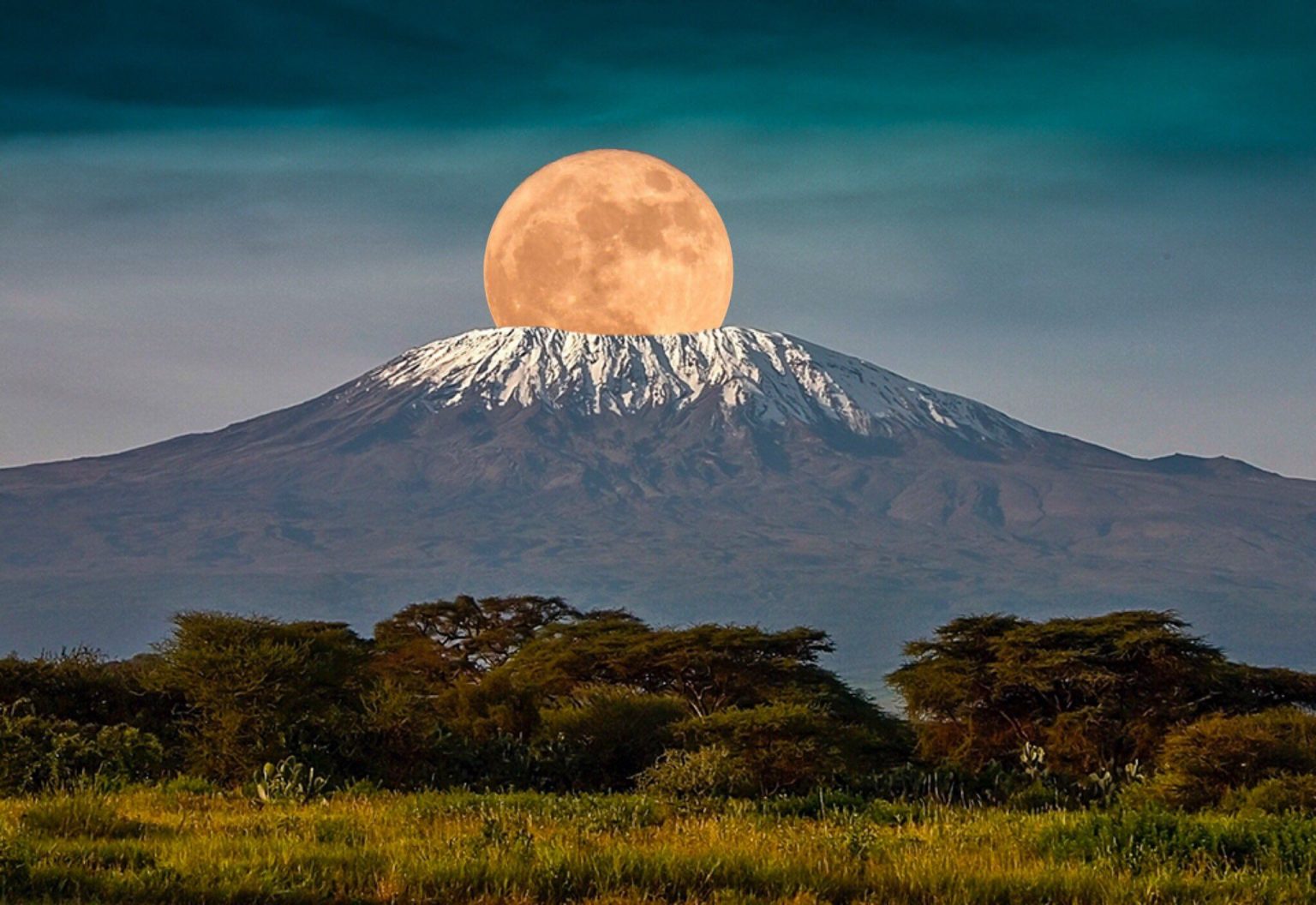 What does “Kilimanjaro” mean?

Most people believe it to be the European pronunciation of a KiChagga phrase meaning ‘we failed to climb it’, the name Kilimanjaro is commonly accepted as a mix of the Swahili word Kilima, meaning mountain, and the KiChagga word Njaro, which translates as whiteness.

and when you combing them together you get “Mountain of Whiteness,”

Kilimanjaro is among one of the most popular destinations for tourists and thrill-seeking mountain climbers visiting East Africa, but not many are aware of the roots from which its unique name comes from. Read on to learn more about the name “Kilimanjaro” and what makes it a fitting title for the great and majestic, breath-taking volcanic range.

Kilimanjaro is a dormant volcanic mountain range in the country of Tanzania in East Africa, located about 200 miles away from the equator. Although, this can be hard to believe, seeing that its mountain peaks look and feel more like Antarctica in the south pole.

In addition, the climate surrounding Kilimanjaro is normally among the hottest in the world. That’s what makes this mountain range unique; it’s snow-capped on the peaks and features all four major climates and five ecological zones around the region year-round, including bushland, rainforest, moorland, alpine desert, and arctic zones. With that said, there are simply no other places in the world like Kilimanjaro, from its high 19,000-feet elevation to flora and fauna of the area.

There are local mountain tribes around the mountain range. Some notable tribes are the Swahili speaking tribes and the Chagga tribe, which helped give this volcanic mountain range its name. Historically, they were known to be a cannibalistic society but have since modernized and are very welcoming to foreigners and visitors of the area.

The name, “Kilimanjaro,” is actually a westernized version of its origins. The name is said to derive from a combination of words in Swahili and a local Chagga tribe’s language that describes this amazing mountain.

As a linguistic hybrid, it’s important to take into account cultural beliefs that led to the creation of the name. By combining local beliefs, explorers’ experience, and the history of early writings, we can try to build a complete understanding of what “Kilimanjaro” means.

Because the national language of Tanzania is mostly Swahili, there is more evidence linguistically to suggest the name derives its root there. For example, the Swahili word, “Kilima,” which makes up the first half of the volcano range’s name, actually means “mountain.”

Around the mountain region in Tanzania is a tribe known as the Chagga. In their local language, “Njaro,” or the second half of Kilimanjaro’s name, means “whiteness.” Added to the Swahili term, we get “Kilimanjaro,” or “white mountain,” which perfectly describes the volcanic range’s snow-covered mountain peaks.

But why not use a word that means “snow” to make the name “snowy mountain” instead? The explanation is simple: the Chagga tribe did not yet have a term for snow by the time the Europeans arrived; ultimately, the early explorers gave it its final name, but the Chagga people still referred to it as “White Mountain” or “Shining Mountain.”

Fun Fact: The Chagga do not look at Kilimanjaro as one mountain; they actually claim it is three entities. This is because, to the common observer, the mountain has three volcanic mounts. Each is broken atop and is seen to have ice-capped peaks. One peak is called Mawenzi. Another is called Kimawenzi or “broken top,” and the last is Kibo, which name means “Snow.”

Interestingly enough, the Chagga Tribe’s oral language does not exactly call Kilimanjaro by this name; in fact, the tribe had given the mountain a more colloquial name that has an alternate meaning. This started when the Chagga peoples welcomed Western explorers to the region in the early 1800s.

The early explorers wanted to know what the tribe called the mountain. Many of the local tribes knew the immense height of the mountain caused caravans to suffer strange sicknesses, while they noticed birds could not fly so high along the mountain’s peak. As a result, many tribes, including the Chagga, referred to the mountain as the “Mountain Where Caravans Fail” or “Mountain Where Birds Cannot Fly.”

The Chagga Tribe is one of a few others in the area that believe in evil spirits and their ability to inhabit locations. In passing, they refer to an evil spirit, “The Njaro” that is said to live in the mountain. The belief is that The Njaro is the reason why so many caravans and would-be climbers often fail to reach the mountain’s peak. This is because The Njaro was said to have the power to cause sickness (what we know today as altitude sickness).

Some believe that the Chagga’s ancient belief in The Njaro is what eventually influenced the creation of the name “Kilimanjaro,” although it is not a popular explanation of the name.

Alternatively, other tribes believe that the mountain is, in fact, the dwelling of a local deity, who also causes sickness when ascending the mountain. Locals will warn potential climbers to slow down while heading up, so as not to be affected by the god’s sickness, which can strike without warning.

Other Historical Origins of the name Kilimanjaro

Early works by Ptolemy, note that he explored the region and referred to Kilimanjaro as the “Mountain of Silver Moons,” or the source of the Nile River. Presumably, the “Silver Moons” are the white snow or glacial peaks of the dormant volcanos. However, none of these theories have been confirmed by other historians or explorers.

Many explorers on the ground today will say the name “Kilimanjaro” means “Mountain I Fail to Climb” simply because getting up the mountain has proved to be very challenging even for the most experienced mountain climbers.

Making a trip up the mountain is dangerous due to the combination of extreme weather and high altitudes, causing altitude sickness. Less than 60% of those who plan to climb it, actually make it to the 19,000+ feet tall summit. To overcome this obstacle, many local guides will quell excited climbers, highly recommending that they slow down during their ascent.

The climb up Mount Kilimanjaro is challenging, and the name itself is a hurdle just to mutter correctly, let alone understand its meaning.

Most linguists and etymologists, who study the roots of local words, agree that “Kilimanjaro” means “Mountain of Whiteness,” or “Shining Mountain.” The name is generally understood to be a combination of two words from different tribal languages (“Kilima” or mountain from Swahili and “Njaro” or shining/whiteness from Chagga tribes).

Kilimanjaro has a rich history of exploration and conquest, and the “Shining Mountain” or “White Mountain” is nothing but a majestic sight to behold.