Kilimanjaro, the highest mountain in Africa, is located between latitude 2o50” and 3o10”E, about 330km South of the Equator, Northern Tanzania. Its size is 1688Km2 and comprises of two dormant Kibo 5,895m a.m.s.l and Mawenzi 5,149m a.m.s.l and one extinct Shira 3,962m a.m.s.l volcanoes respectively.

It is the World’s highest free standing mountains that rise on the undulating surrounding plain that averages around 1000m above sea level. It was declared as a National Park in 1973, officially opened for tourism in 1977, declared a World Heritage Site by UNESCO in 1987 and Natural Wonder of Africa in 2013.

The Park Headquarters is at Marangu, about 44 Km from Moshi town and 86km from Kilimanjaro International Airport 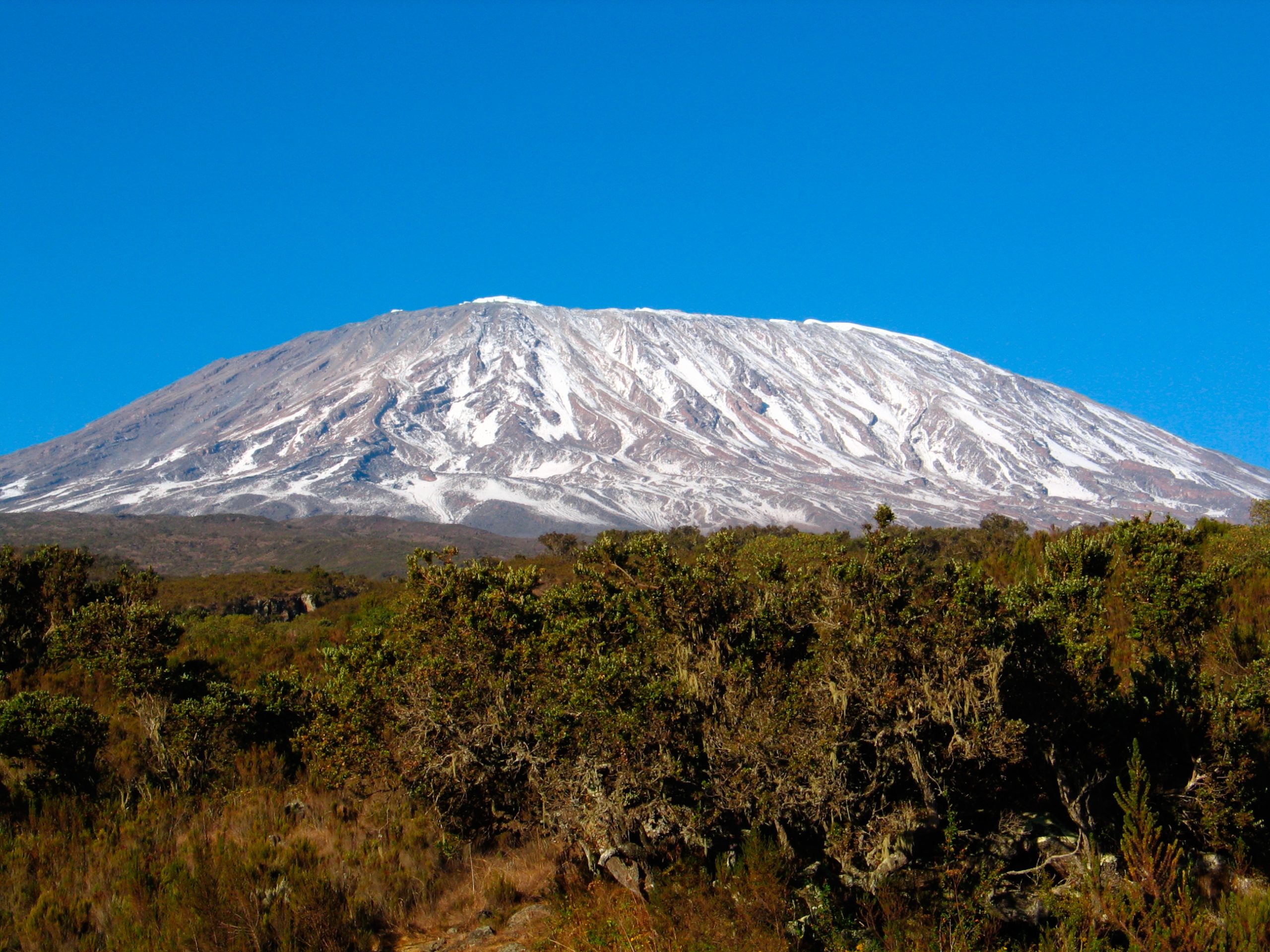 The climate is mainly influenced by the prevailing trade winds. There are two rainy seasons in a year. The wet season is from March to May during which it rains around the mountain base and snow accumulates on its peak. The dry season is from late June through September during which the nights are cool and the days completely clear.

During the short rainy period of October – December there is rain during the day whereas the nights and mornings remain clear with excellent visibility. January and February are usually dry, warm and clear with brief rain showers that provides for good climbing conditions.

How To Get To Kilimanjaro National Park

The distance from Arusha City to Moshi Town is 123Km and it takes two hour (2hrs), reaching to Marangu (Park Headquarter) from Moshi Town is 48 km and takes an hour (1Hour) drive.  It is about 86Km from Kilimanjaro International Airport (KIA) to Park Headquarter (Marangu) by road and it take one and half hour (1Hr30Min). The park can only be reached by road. Read more on how to get to Kilimanjaro

Mountain climbing can be done throughout the year. However, the best time is mid June-October and December-mid March.

These are places of interest where tourists can visit, typically for its inherent or exhibited natural or cultural value, historical significance, natural or built beauty, offering leisure, adventure and amusement.

There are total of 13 picnic sites along the hiking routes (Rongai starting, Kisambioni, Lauwo, wona, last water, Jiwe la Ukoyo, Machame half way, Jiwe la Mbula, Baranco junction, Morum, Uwanja wa ndege, Mgongo wa Tembo, Daraja Refu, Kilimamchele) that offer a spectacular view of the attractions found in and outside the park. They are best places for taking packed meals on your way to the roof of Africa.

The Route starts from Marangu via Lauwo Waterfall to Mandara Hut then back to Marangu. The route covers a distance of 12Km.

The Route starts from Machame Gate to Macham Hut then back to Machame Gate. The route covers a distance of 11Km

The Route starts from Rongai Gate to Simba Camp then back to Rongai Gate. The route covers a distance of 5Km.

Activities for non-summit bound climbers include:
• Visit to the water falls (Lauwo)
• Visiting the Shira Plateau
• Watching wildlife including high altitude birds
• Walking through the Mountain Forest
• Day walk to Maundi crater in the park, Lake Chala and cultural sites such as Kifunika and cultural camps in the villages around.

This route is also for ascending located on the western side of the mountain and it comprised of six stations of Mti Mkubwa then join Londorosi route at Shira I.

This is ascending route located on the western side of the mountain and it comprised of five stations namely Shira I, Shira II, Baranco, Karanga and Barafu. It also offers the chance of using the Northern circuit and Western breach.

This is ascending route located on the South-West of the mountain and it has five stations namely Machame hut, Shira cave, Baranco, Karanga and Barafu.

This is a descending route located on the southern side of the mountain. It comprised of three stations namely Mweka hut, High camp (Millenium) and Barafu. Visitors form Londorosi, Lemosho, Machame and Umbwe descent using this route.

It is ascending route located on the South-West of the mountain and it has four stations, the Umbwe cave inside the forest belt and the other three after join Machame route at Baranco camp.

This route is for cycling. It has three stations namely Kilemamchele, Maua and Kibo; it is two way traffic.

This is ascending-descending route with provision of huts along the trail. It has three stations namely Mandara, Horombo and Kibo. On the mountain stations, there are toilets, kitchens, dinning and rooms for clients. Advance booking through a licensed mountain tour operator is mandatory.

The Park provides a variety of accommodations ranging from Mountain huts, hostel and 32 public Campsites. Booking for huts and hostel is done through licensed local tour operators