Looking at the Mount Kilimanjaro map below you can see that there are 7 routes to reach the summit ( Uhuru Peak ). The Mweka route is for descent only and the other route for descent is Marangu route when you hike via Rongai route or Marangu Route.

Mount Kilimanjaro is the highest free standing mountain in the world, rising 5,882 metres or 19,298 ft from it/s base. It is a volcano with three volcanic cones, Kibo, Mawenzi, and Shira. Kibo’s highest peak (Uhuru Peak) rises 5,895 metres or 19,341 ft above sea level. Mount Kilimanjaro is a member of the famous “Seven Summits“, the highest peaks on each of the seven continents. Just 200 miles (325 Km) from the equator, Kilimanjaro’s glistening peak of snow and ice looms high above the African Great Rift Valley. 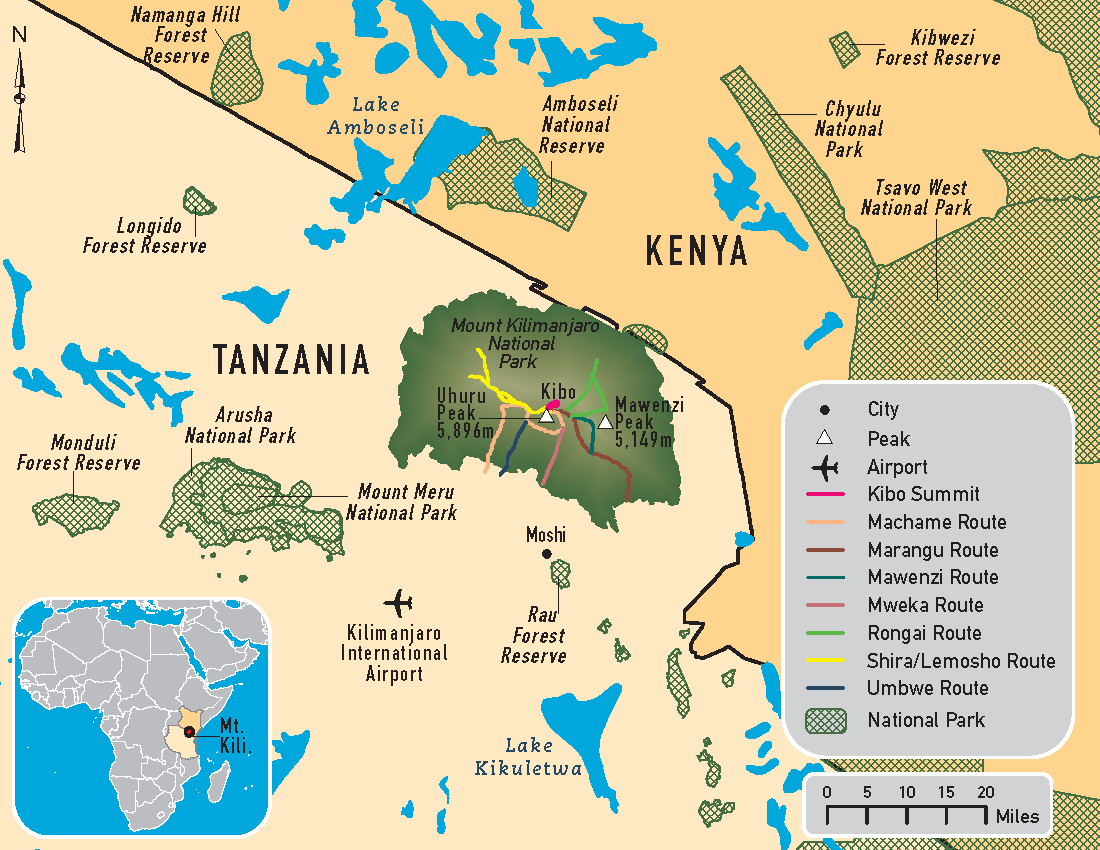 Below I have a quick summary of the 7 Kilimanjaro Routes.

Kilimanjaro is composed of three volcanic cones: Kibo The highest point being Uhuru or Kaiser Spitze – (19,340 feet), Mawenzi Looks like Mt. Doom of Mordor – also known as Hans Meyer Peak – (16,893 feet ) and Shira – the oldest of the three is actually not particularly noticeable as a volcanic cone because it collapsed and was filled in by Kibo’s lava flows, creating the stunning Shira Plateau.

Safety and Success in Summiting
It’s crucially important to research how to train for your Kilimanjaro climb. It’s often not the level of fitness but the onset of altitude sickness that hinders climbers. Choose an experienced operator and one that is prepared for any medical emergency.

Forest Vegetation and Wildlife
The lower slopes of mount Kilimanjaro is encircled by forest and wildlife. On the first day of the ascent, you may be fortunate to encounter elephants and colobus monkeys along the trail.