Mostly when we see photos of Kilimanjaro’s summit, it’s of tired, but exhilarated climbers celebrating their epic achievement in front of the Uhuru Peak sign, taking photos and high-fiving each other.

But there’s a lot more to the summit of this great mountain, than just the signboard.

So what makes Kilimanjaro’s summit different from other mountains? Why is it unique? Read on to learn the secrets that lie at the top of this great mountain.

Geology of the Kilimanjaro Summit

Unlike mountains such as Everest, that are part of a mountain range, and have an actual ‘peak’ at the top – the highest point often being a small, narrow section of rock, Kilimanjaro is a volcano crater, where the summit is not, in fact, a peak, but simply the highest point on the crater rim. 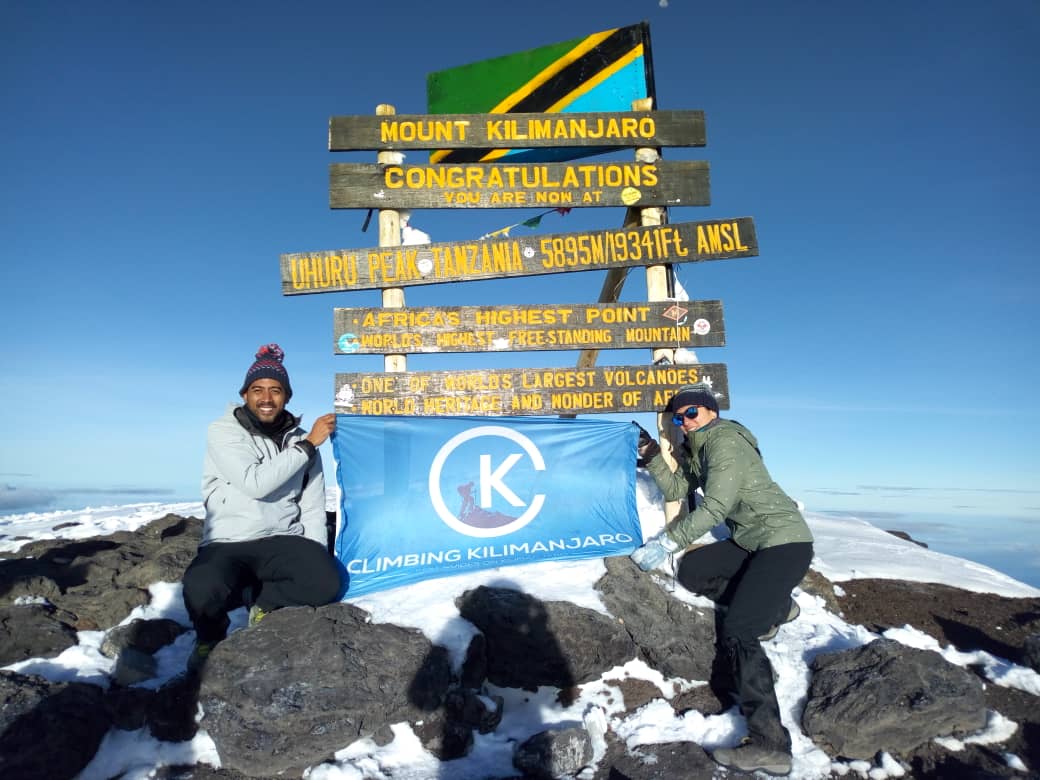 Mt Kilimanjaro is a stratovolcano, made up of three cones: Shira, Mawenzi, and the highest: Kibo.

Kibo where the summit of Mount Kilimanjaro namely Uhuru peak is a dormant volcano, the last eruptive activity happened around 200,000 years ago, forming the crater we see today, with an almost symmetrical cone around the caldera (crater).

Inside the caldera, is the inner crater, or ash pit, known as the Reusch Ash Pit, which is the true center of the volcano, where sulfurous fumes still belch out, reminding us of the mountain’s active past.

It’s in this caldera that during the last ice age, massive glaciers formed, at one time completely covering the top of Kibo These days, the glaciers are melting, as can be seen clearly when looking at modern pictures versus pictures of Kilimanjaro from the past.

But that’s not to say that the existing glaciers are not still impressive! Huge ice structures, glistening in the sunshine, against the barren rocks and scree of this inhospitable place.

Camping in the Crater

Crater Camp – the highest camp in Africa is 18,700 feet above sea level. From the crater rim, hikers descend into the caldera, and camp, below the summit, on the dry, rocky scree, with only the glaciers for company. It’s bitterly cold, the sun is harsh, and the air is thin.

The occasional cracking sound as a giant wall of ice moves ever-so-slightly is the only sound, apart from the whistling wind. Nothing grows here – no animal life and the only plant life is ancient lichens that form very slowly on the black volcanic rocks. It’s not a place you want to spend too much time.

But it’s spectacular! For well-acclimatized climbers, the chance to spend a night in the crater is not to be missed. It’s tough here, with the glaciers for company, the thin air, and bitter cold makes sleeping difficult, and the faint smell of rotten eggs reminds you that you’re in a volcano.

If you wanted to spend a night in the crater, you’d have to arrange it in advance with your tour company, as most climbs don’t include this as standard.

Most climbers don’t make it to the ash pit. They stop at the signboard, take pictures then descend. But for those who have arranged to camp in the crater, it’s possible to hike to the very center of the volcano.

About 30-40 minutes from crater camp, up a steep slope, you’ll come across a perfectly formed volcanic cone – almost a perfect circle. Looking down, it’s seemingly never-ending, and the smell of sulfur is strong. About 400 feet wide, and comprised of shale, scree, and large boulders, with fumaroles at the base, which emit sulfur and steam.

No, you can’t go down, as it’s estimated the temperature of those fumarole vents is the same as boiling water!

Named the Reusch Crater, after the first person, apparently, to ‘find’ it, Richard Reusch, a Lutheran Missionary, living in Marangu, who climbed Mount Kilimanjaro multiple times, and was notably the 7th European to sign the register at the summit, at which time he planted a Christian flag.

Is it a myth? Or is it real? Ernest Hemingway’s book The Snows of Kilimanjaro begins with a reference to a leopard: “Close to the western summit there is a dried and frozen carcass of a leopard. No one has explained what the leopard was seeking at that altitude.” Apparently, Richard Reusch, on one of his climbs, did indeed find a frozen leopard on the crater rim and cut off an ear as a souvenir, and possibly to prove to his friends that he wasn’t hallucinating!

Uhuru peak (which isn’t a peak, as mentioned earlier) is the highest point on the crater rim that encircles the inner caldera. It stands at 19,340 feet above sea level and is the official summit of Mt. Kilimanjaro.

Formerly known as Kaiser Wilhelm Spitze, it was named by Hans Meyer, a German geologist and the first European to summit. At independence, in 1961, the Tanzanian government renamed it Uhuru Peak, the word “uhuru” meaning “freedom” in Swahili.

Around the crater rim are other notable place names, Stella Point is the first stop on the rim for climbers coming up from Barafu camp, and it is named after Stella Latham, the wife of a member of the South African Mountain Club, Kingsley Latham. In 1925, they reached this point together. For some reason, the name has stuck. To end up in the Barafu camp you use the following routes : Machame route, Lemosho route and  Umbwer route

For climbers on the Marangu route, coming via School Hut, the first point reached on the rim is Gilman’s Point. This is named after one of the founders of the East African Mountain Club (set up in 1926, arguably the first ‘tour operator’), Clement Gilman.

On the western side of the crater rim, is where the leopard was apparently found, and it’s colloquially known as “Leopard Point”, though there isn’t a signboard.

Getting to the Kilimanjaro Summit – Uhuru peak

Depending on how long your chosen route has taken you, you’ll end up at one of three main ‘basecamps’ on Mt Kilimanjaro. School Hut and Kibo hut take you up to the rim from the east via Gilman’s Point, Arrow Glacier Camp means you’ll be scaling the Western Breach, and lastly, the most-used route is via Barafu Camp in the south east.

From Barafu, it’s mostly a night-time climb, leaving camp at around midnight, and reaching the crater rim by dawn. This allows for spectacular views of the sunrise and allows enough time to descend in time for lunch. For those planning to camp in the crater, a daytime summit attempt is possible.

The trek to the summit is tough. Bitterly cold, there’s very little oxygen in the air, and the trail is comprised mostly of volcanic scree. It’s a tough, 7-9 hour hike, the biggest challenge is the thin air. Which makes it all the more worth it when you do make it to the top!

On the west side of Kibo, the crater rim has collapsed, creating what is known as the Western Breach. Looking at it from below, it’s like a giant bulldozer has crashed through the crater rim, leaving boulders down a deep gash in the side of the mountain.

It’s known for being a dangerous and difficult route to the summit. Sadly, there have been deaths due to rockfall on this side of the mountain, and for a while, the route was closed.

While it’s not technical in the sense that a mountain such as Everest is, requires some scrambling and is very much a ‘straight-up’ route to the crater. Very steep, you climb via switchbacks and need a good head for heights.

It’s not possible to descend via this route, you’d have to cross the crater floor – or go up to Uhuru peak and descend via Stella point.

Summit success rates, overall, for Kilimanjaro are very hard to come by. The National Parks Authority does not release figures. So we’re left with estimates from tour operators. No one has 100% success rate, as this simply isn’t possible.

What is true, however, is that some routes have much better success rates than others. And the longer routes tend to come out on top. Your operator’s summit success rate is only one indicator of how good they are, more important is their safety record.

Anecdotally, the official figures have been quoted as low as 40%, and as high as 67% – either way, a good number of people attempting to reach the summit of Kilimanjaro fail.

The Journey to the Summit

Climbing Kilimanjaro is an incredible journey, from the equatorial forest to the frozen tundra, and it doesn’t need to end at the Uhuru peak signpost. There’s much more to Kili’s summit than that, so if you’re wanting to plan your next adventure, and would like us to show you the secrets of Kilimanjaro, get in touch now, and we’ll arrange the trip of a lifetime on this great mountain.

Ready to get started? You’ll need these guides to walk you through your preparation for climbing the highest mountain in Africa: