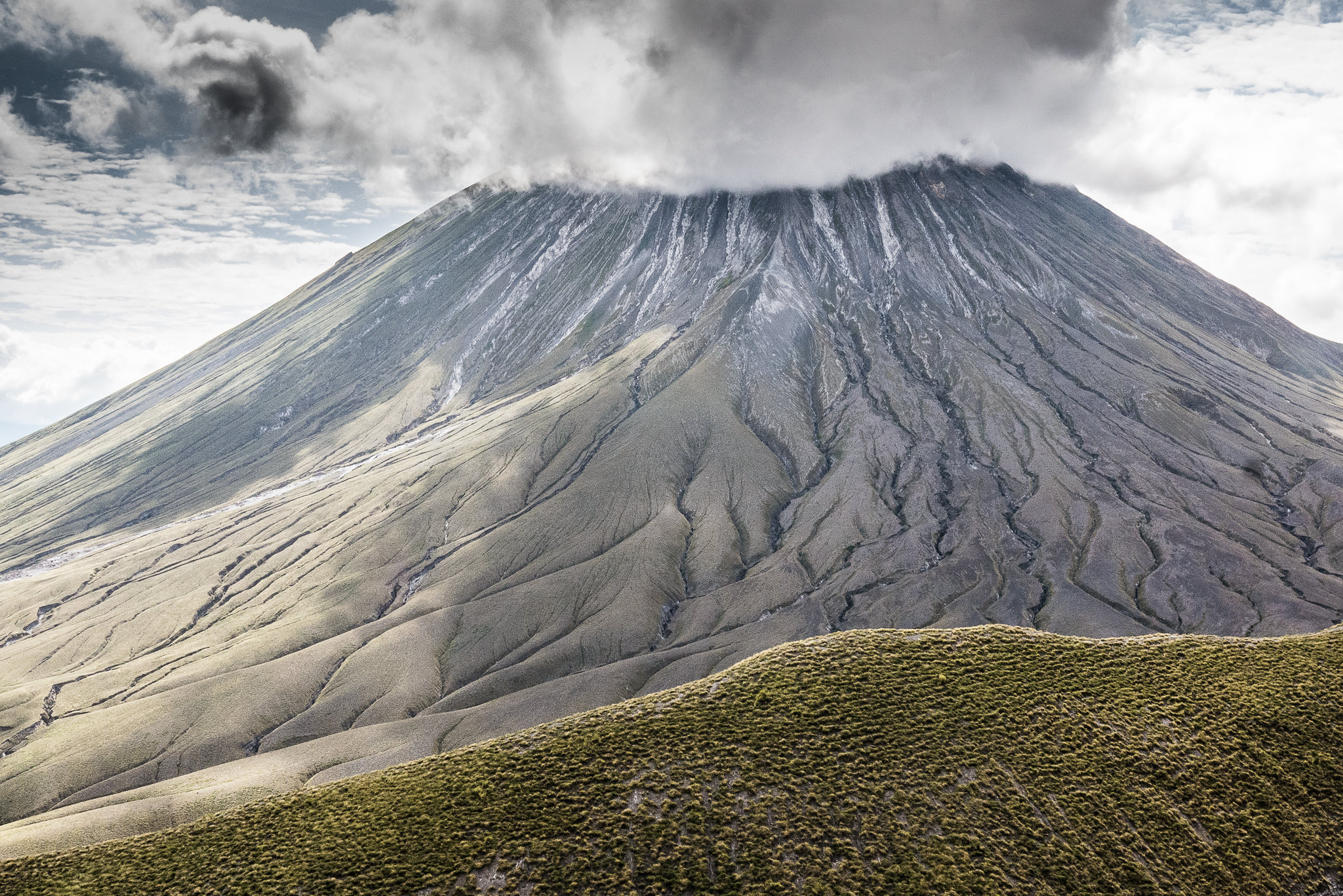 Ol Doinyo Lengai volcano, altitude 2960 meters (9711 feet), is a unique and extremely fascinating volcano that towers above the East African Rift Valley in Northern Tanzania, just south of Lake Natron. It is the only volcano in the world that sometimes erupts natrocarbonatite lava, a highly fluid lava that contains almost no silicon.

Natrocarbonatite lava is also much cooler than other lavas, being only about 950 degrees F (510 degrees C) compared to temperatures over 2000 degrees F (~1100 degrees C) for basaltic lavas. Natrocarbonatite is the most fluid lava in the world. Lava with a low gas content can flow like a whitewater stream, and actually has a viscosity near that of water.

Natrocarbonatite lava glows orange at night, but is not nearly as bright as silicon-based lavas since it is not as hot. During the day it is not incandescent; most flows look like very fluid black oil, or brown foam, depending on the gas content. In the past, some visitors to the crater believed they were seeing mud flows. Most newly solidified lava is black and contains crystals that sparkle brightly in the sun.

There are also sometimes small flows known as “squeeze-ups” that are light gray when they flow and harden. Contact with moisture rapidly turns natrocarbonatite lava white because of chemical reactions that occur when the lava absorbs water.

Eventually the water absorption process turns lava flows into soft brown powder. During dry weather the whitening of flows happens over a period of a few days to a couple of weeks, depending on the thickness of the flow. In rainy weather the lava surface turns white immediately.

In parts of the crater that have been inactive for several months, the ground is light brown/white and so soft that one sinks into it when walking.

Ol Doinyo Lengai also has phases of explosive activity during which the composition of the lava may contain much more silicate material, reducing its viscosity. In this type of eruption there is no fluid lava and activity takes the form of ash eruptions accompanied by ejection of blocks and bombs.

Since the mid 1980’s, lava flows, and to a much lesser extent, explosive eruptions, have been witnessed by many observers of Ol Doinyo Lengai. Natrocarbonatite lava eruptions are usually centered in one or more small cones that have been formed on the crater floor by previous eruptions of lava.

These eruptions have typically taken the form of open lava pools or lakes that may or may not be overflowing, lava flows issuing from holes or cracks inside or near the base of the cones, or lava splashes or fountains from the summit vents of the cones.

The activity is not well understood but is thought to be a function of the plumbing of the crater, the level of the lava within the plumbing, and the gas content of the lava. No one knows what causes the lava to flow out at any particular time or how the various vents in the crater are interconnected.

Mineralogists would like to understand how the lava evolves under the surface and why it has its unusual chemical composition, but that also is unknown, although there are several theories. Finally, no one has any idea why the pattern of frequent small lava flows gave way to explosive activity at the end of August 2007 and how that may have related to earthquakes in the region during the previous two months.

Day 1: Depart Moshi town or Arusha city at 7.00 am and drive to Ngaresero village (Lake Natron) with packed lunch. This is about 5 to 6 hours driving. Dinner and overnight at Giraffe eco camp.

Day 3: Morning have breakfast then drive back to Arusha or Moshi. This depends on the itinerary.

WHAT TO WEAR WHEN CLIMBING MOUNT OL DOINYO LENGAI

buff or lightweight neck gaiter (for keeping out dust)

teva or flip flops for in camp

gaiters for those that have low cut hiking shoes